The current concern about our connection to nature has a long history. The Victorian nature writer Richard Jefferies (1848 – 1887) founded a form of naturalism that recognised an increasing divide between people and nature, and his writing also explored the relationship between mind and nature.

The long tradition of writing about nature is a reflection on how the mind sees nature and itself, it’s about understanding our relationship with nature. Some have argued that nature writing tests the boundaries of self against nature and is therefore a route to understanding of our place in the natural world. This stance fits the dominant Cartesian tradition of modernity with the subject being separate from object. However, an alternative viewpoint on mind and nature is the phenomenological perspective offered by Merleau-Ponty that suggests a shared place in nature.

Early and classic nature writers such as Henry Thoreau in the 1850s, considered the impact of nature upon mind, but there was little deep thought into the nature of mind. In the 1836 essay, Nature, Ralph Waldo Emerson wrote of the flow of nature into mind and its impact, but again tends not to consider the nature of mind beyond writing “the whole of nature is a metaphor of the human mind”. I found that it was Richard Jefferies who explored that landscape of mind and nature more fully.

With relevance to today’s urban living, Jefferies found joy and intensity in everyday nature. Then his awareness stepped beyond that of the seen and heard with an explosion of reference to mind from late 1882. In the article The Sun and the Brook, Jefferies’ lyrical writing extended the flesh into the landscape and, like Nan Shepherd, showed a thinking that has similarities to the mid-twentieth century philosophy of Merleau-Ponty. Merleau-Ponty wrote of “the Flesh” as a collective term for the flesh of the human body and the flesh of the world and highlighted the interconnection between the perceived and perceiver – we are embedded in the landscape.

“The grass sways and fans the reposing mind; the leaves sway and stroke it, till it can feel beyond itself and with them, using each grass blade, each leaf, to abstract life from earth and ether. These then become new organs, fresh nerves and veins running afar out into the field, along the winding brook, up through the leaves, bringing a larger existence. The arms of the mind open wide to the broad sky.”

Richard Jefferies, The Sun and the Brook 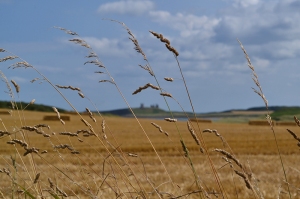 Throughout work published in 1883 Jefferies considered mind with great regularity. He contemplated the interaction of mind and nature, the need of mind for nature and extended the mind into the landscape. He discussed the elusive mind, free of laws that rule matter, the power of mind, and the untapped mind that no thought has sailed. Although, in The Story of My Heart, Jefferies still appears to view nature as separate, referring to the repellent toad, creatures that shock the mind such that by no reasoning can nature be fitted to mind.

Yet, repeated journeys through the local landscape, noting nature and writing on foot can reveal the unity of mind and nature. By 1884 Jefferies writes of the “sweet accordance” of mind and nature, how it is “absorbed by beauty”; a choice of words that suggests an interconnectedness. And as his mind wandered “deeper and farther into the dreamy mystery of the azure sky”, Jefferies wrote of unknown grand thoughts “hovering as a swallow above”. Finally, in Nature and Eternity, published posthumously in May 1895, Jefferies writes:

“We are of the great community of living beings, indissolubly connected with them from the lowest to the highest by a thousand ties.”

This development of thinking through repeatedly walking the local pathways continues into his final works such as The Open Air, where in 1885, he considered mind being made happy by unconscious visceral experience of nature, rather than reflection – an idea with similarities to more recent thinking on the different levels of brain mechanism, pre-reflective processing and perceptual fluency. Richard Jefferies was of nature and before his time.

Adapted from my book A Blackbird’s Year: Mind in Nature – out now. 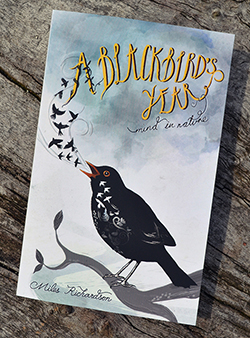 Professor of Human Factors & Nature Connectedness - improving connection to (the rest of) nature to unite human & nature’s wellbeing.
View all posts by Miles →
This entry was posted in Uncategorized. Bookmark the permalink.