Our Growing Disconnection: The Decline of Nature in Fiction, Film and Song

A brief blog to quickly highlight a research paper just published in Perspectives on Psychological Science. The article opens with reference to the January 2015 letter to OUP protesting at the loss of nature words from the Oxford Junior Dictionary. The study analysed works of popular culture throughout the 20th century, finding a cultural shift away from nature starting in the 1950s. The authors, Kesebir & Kesebir go on to consider what might explain the decline.

Books, films and songs reflect the social context of their time, offering an insight into changes in culture over the years. The authors equate nature connectedness to nature references in such works, arguing firstly that they reflect their creators’ minds and the social scene. Secondly, that the writer will want the work to resonate with their audiences. We’ve only had measures of the psychological construct of nature connectedness for 15 years or so, so such an approach is worthwhile and it produced interesting results.

A nature lexicon of 186 words was used and compared to a comparison set of human-built environment words. The percentage of nature words rose slightly from 1900 through to the 1940s, with a sharp decline from the 1950s through to 2000. An eyeball of the data shows a pause in the 1970s, with clear decrease from the 1980 onwards.

The analysis of film storylines also showed a decline, this time from 1930 through to 2010. The analysis of song lyrics ran from 1950, showing a scattered range of nature word use into the 1970s, but a defined modest reduction from 1980. There’s reason for a little hope though with a rise from 2000 to 2010.

However, the overall trend is clear, nature features significantly less in popular culture today, than it did around 1950. The authors acknowledge that some of this decline relates simply to the use of new words, reducing the frequency of the appearance of older words. However, a parallel pattern was not found in human-made environment words.

Two arguments are often put forward to explain our growing disconnection from nature. Urbanization and Technology. The paper argues that rates of increasing urbanisation don’t mirror the decline of nature words, yet the dawns of new technology do; from television in the 1950s to video games in the 1980s. Perhaps these technologies replaced nature as a source of joy? It seems the technology that defines us as humans shapes us more and more. 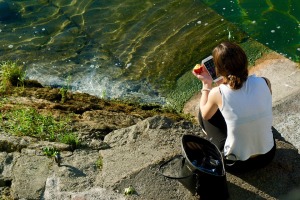 In the conclusion a cause for concern is noted – books, film and music not only reflect culture, they also shape it. Nature seems less worthy of attention, less likely to be a source of joy and wellbeing.

Such concerns lie at the heart of my research into ways to increase nature connection. One successful method is getting people to pay attention, to encourage them to find joy in nature through writing. We used one of the software packages used in the research above (LIWC), to study the sentences written by people asked to note down the good things in nature each day – thankfully people were happy to engage, they just needed a prompt. The key aspects of their sentences were sensations, changes over time, active wildlife, beauty and the interaction of weather and natural forms. These five themes accounted for over 70% of the sentences that people wrote as they went about their day-to-day activities in a predominately urban landscapes, helping us understand how to engage people with nature in an everyday context – focus on the senses, change, activity and nature’s beauty. Or simply ask people to note the good things in nature each day, it led to sustained increases in nature connection and wellbeing. We’ll be prompting the people of Sheffield to do that this summer in our IWUN research project.

3 Responses to Our Growing Disconnection: The Decline of Nature in Fiction, Film and Song