Shinrin-yoku, or forest-bathing, has been receiving increased attention internationally. Our latest paper provides a review of research that has considered forest bathing and mental health. Following peer review the full paper has been published in the International Journal of Mental Health and Addiction.

Shinrin-yoku is a healing practice in Japan, where people immerse themselves in nature, while mindfully paying attention to their senses. Often involving a walk in a forest, it aims to integrate and harmonise humans with a forest. Shinrin-yoku programmes vary and can include breathing exercises, yoga, meditation, walking, aromatherapy, and other recreational activities (e.g., cooking), that are often aimed at producing relaxation effects for well-being. 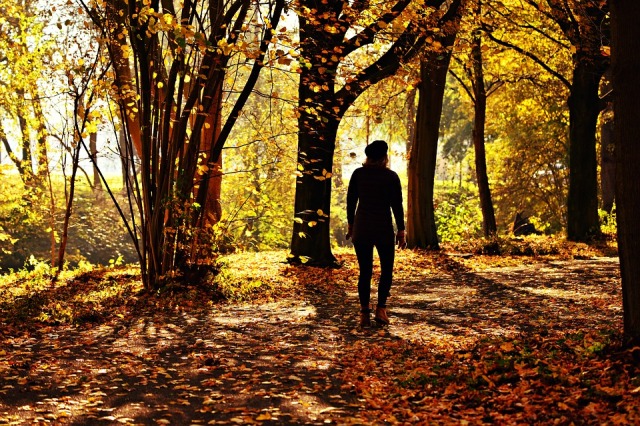 We gathered 481 articles related to forest bathing and nature therapy in someway. Of those, twenty met inclusion criteria, e.g. being peer-reviewed, being of good design and using forest bathing. Of the 20 papers eight were non-randomised trials and twelve randomised controlled trials. The studies were mainly conducted in Asia with three in Europe.

They also used a variety of different forest bathing approaches (e.g., breathing, walking, yoga) and time duration ranged from 15 minutes to nine days. While all studies involved paying attention to the five senses, 18 (90%) studies involved walking and three (15%) involved recreational activities. A variety of outcomes measures were used, including depression, anxiety and anger. The results from all these studies was included in a meta-analysis. A total of 2257 participants (M=1478, F=779; age range 18 to 79 years old) were involved in these included studies. It’s interesting to note that our systematic review of nature connectedness included 50 research studies, involving 16,396 people, yet forest bathing gets 300 times more press coverage (37,600 news stories mention forest bathing, 123 news stories mention nature connectedness).

While some of the forest bathing studies demonstrated good design and reporting, we found a number of weaknesses concerning study design and outcomes. Therefore an important outcome of the research in recommending a number of areas of improvement, which should strengthen future shinrin-yoku research.

With those design caveats in mind we did find some evidence that shinrin-yoku could be effective for depression, anxiety, stress and anger in both clinical and non-clinical samples, especially for anxiety. Although all included studies demonstrated some promising results, the risk of bias was deemed medium to high, and potential publication bias was identified in almost all analyses. This may explain why benefits were greater for Japanese and Asian participants: people in a culture that accords with nature’s healing effects may receive greater benefits from shinrin-yoku.

A key finding was that none of the randomised control trials (RCTs) compared shinrin-yoku with other major therapeutic approaches such as cognitive behavioural therapy (CBT). Shinrin-yoku was often compared with spending time in urban settings. Spending time in urban setting has negative health effects and our RCT meta-analyses targeting anxiety and anger, found that all control groups reported increases in mean scores. Therefore, some of the the benefits found could be related to negative impact of the control condition, rather than positive benefits of forest bathing. We recommended that shinrin-yoku should be compared with other major therapeutic approaches and simply spending time in nature to explore the added value forest bathing brings.

A further observation was the variety of practice and time spent in forest bathing interventions. This makes it difficult to establish what works and the value added by some elements. To be more accepted as a reliable clinical approach, there needs to be greater understanding of which aspects of shinrin-yoku deliver benefits so they can be core to delivery.

Other limitations in the shinrin-yoku research reviewed included a lack of follow-up assessments. A lack of follow-up assessments can compromise the validity of clinical research because whether the effects of shinrin-yoku can last for a period of months remains uncertain. The representativeness of the sample was also not addressed, therefore whether the study recruited people who were interested in, and positively interpreted/reported the effects of shinrin-yoku or not was not clarified. In the RCTs, randomisation and blinding were not addressed. In addition, many RCTs used a crossover design with no interval (the groups were swapped on the next day), which may violate the accuracy of the results: the impacts of the first intervention need to be ‘washed out’ before swapping the groups. Furthermore, failing to blind the researchers can lead to placebo effects in participants; this maybe particularly important when studies include a prominent shinrin-yoku figure. Finally, the included RCTs did not conduct intention-to-treat analysis and did not clarify whether other outcomes were measured or not.

The twenty studies of a suitable standard to be included in this systematic review and meta-analysis reported that shinrin-yoku could be effective for mental health, particularly anxiety – but more robust research is required with benefits compared to simple exposure to nature and established therapeutic approaches. Whilst promising results were reported, medium-high risk of bias and publication bias were also identified. Some of the key constructs related to mental health (e.g., self-compassion, isolation, nature-connectedness) have not been explored in shinrin-yoku research and mechanisms of benefits (e.g. nature connectedness and affect regulation) have not been determined. Additionally, the duration of benefits and how they compare with other established therapeutic approaches are needed for shinrin-yoku to be accepted as mainstream mental health intervention.